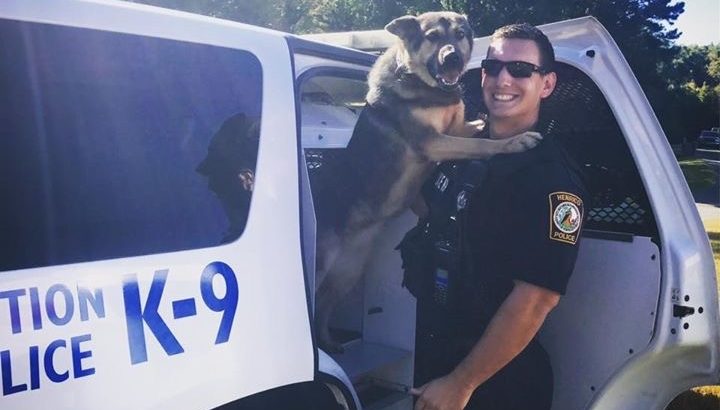 Did you know that the Henrico County employee population is not made up of only people?  It also includes some furry high performers who are essential to some very special operations performed by the Police Division. 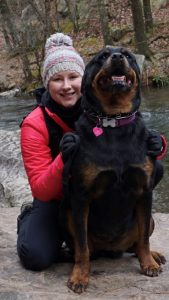 Sergeant Burroughs began her career with the Henrico County Police Division on October 22, 2003 and had a goal to pursue her passion for justice while working with some of the County’s furriest team members. Sergeant Burroughs’ love for animals would eventually lead her to the County’s Canine Unit as their Sergeant in January 2017.  Of her assignment, Sgt. Burroughs said, “I thought I would play with dogs all day and blow some stuff up… Not at all! It is so much more than that.”  Not long after accepting her new canine unit assignment, Sergeant Burroughs quickly realized that working in the division of her dreams requires much more. The most challenging part is managing the unit’s $18,000 per year budget which must cover all the care and support needed for the dogs every year, including vet bills, food, repairs, leashes and kennel supplies for all 11 dogs. 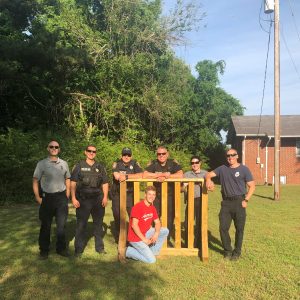 Like many canine units across the country, donations from the community are a tremendous help to the program.  As an example, Hanover High School student Cameron Boxley built and donated an obstacle course to the Canine Unit for his Eagle Scout project. Because of generous donations and support from community members like Cameron, the unit can continue to focus its attention to crime-solving in the County.

Canine unit officers work diligently to solve crimes, connect with the community, and serve as a viable resource for other divisions in their crime-fighting efforts. Under Sergeant Burroughs’ leadership, the unit was awarded the Police Division Meritorious Unit award on April 16, 2019. This prestigious award is given by the Chief of Police to a Division component that goes above and beyond for the Division and for the community.

Now, meet the furriest members of the team:

The Canine Unit is comprised of 11 Canines, each assigned an officer/handler. Five of the dogs are ‘drug dogs’. Being a good fit for the position is just as important for drug canines as it is for humans.  Drug dogs cannot be food motivated; they must be play motivated, driven by attention with a high drive for play.

The Canine Unit also has three patrol dogs – Mako, Macho and Dutch.  Their duties include tracking and article searches. These tracking dogs use ground disturbance – skin cells, hair, body materials – not a specific scent. Tracking canines are highly effective at locating suspects and finding victims.  An interesting fact about patrol dogs is social graces aren’t really their strong suit. Patrol dogs are not very friendly. They are trained to work and take the job very seriously. They are extremely loyal to one person (their assigned handler) and are ready to protect them at all costs.

The Canine Unit also has 2 EOD (bomb) dogs.  EOD Handlers are unique because they are not only specialized EOD dog handlers, they are also certified bomb technicians. Bomb dogs are used for sweeps ahead of significant events or threats. Bomb dogs are critical to the police force and have been found to be much more reliable in finding devices than humans. However, these dogs are not used in the event of a suspicious package situation. “I would never put an officer and a dog in jeopardy next to something that could potentially explode. That’s just unnecessary, that’s a job for ‘Wall-e,’” Sgt. Burroughs shared.

“Wall-e” is a robot used in place of dogs and officers when there is a credible threat. The robot serves a variety of uses that will protect the officers from being able to get into range of a potentially dangerous situation. The EOD robot, affectionately dubbed “Wall-e” by Sgt. Burroughs, uses X-ray technology in identifying explosives and other hazardous threats. “Wall-e’ has delivered pizza and a throw phone to suspects in standoff situations!  If there is something that needs to be eradicated or destroyed, “Wall-e” is the perfect fit for the job! 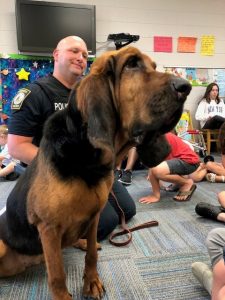 Last but certainly not least, the Canine Unit has Grace, the unit’s bloodhound who has served the County for several years. Grace is nearing retirement very soon and she will be sorely missed. The bloodhounds and their handlers are the workhorses of the unit. While bloodhounds are not as aggressive as some of the other canines in the unit, they are, in fact, extremely effective. They are often used for community programs and engagement and their uncanny ability to differentiate scent with the smallest scent article, for 30 days, in rain or snow, makes them essential to the department.  The bloodhound’s sense of smell is strong enough to use the scent from a single shell casing to successfully track a suspect.  The Canine Unit’s newest bloodhound is Daisy.  She is “all ears and feet” right now.  Daisy was a gift to the Police Division from a breeder and she is currently training and should be fully certified by December.

For more information about the Police Division’s Canine Unit and other units and services, you can check out their Web page at https://henrico.us/police or follow them on social media. 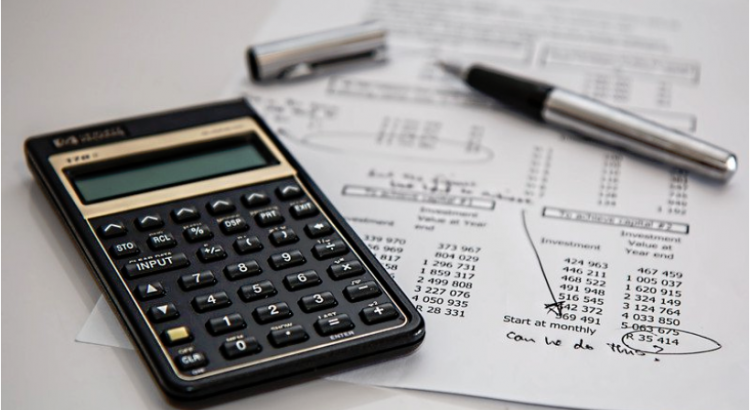 The Henrico County Board of Supervisors recently approved the County’s operating budget for the 2019-2020 fiscal year, but do you know the process involved in getting to that point?  The budget process, overseen by the Office of Management and Budget (OMB), takes almost a full year to develop and demonstrates a carefully thought out procedure. The first step in the process, estimating revenues that are expected for the next fiscal year, begins in August and helps develop a budget that is balanced among resources.

The budget moves to the department level in October when OMB develops target budgets for each county department.  This target budget provides funding for all current positions in the County and funding for operating and capital outlay items, which are based on the prior year approved budget.  In November, county departments receive the County Manager’s budget call which contains the budget policy, special budget instructions, various revisions to the budget manual, a budget calendar, and the target allocation. Departments then review and adjust their target allocations based on their expected spending for the upcoming fiscal year.  When expected expenditures exceed the target allocation, departments must submit a request for additional funding.  Each request for additional funding must be prioritized and prepared with detailed justification to support the need for additional funding.

Once budget submissions have been received, they are reviewed by OMB.  As a result of this review, a narrative for each department is created. Once these narratives are created, department requests are presented to the Executive Budget Review Committee. This Committee holds hearings in the last week of January through the first week of February to discuss budget submissions with departments.  The Executive Budget Review Committee consists of the County Manager, Deputy County Managers, Director of Finance, Director of Human Resources, one department director (on a rotating basis), and OMB staff. Representatives from each department are present at the time their budget is reviewed and they make presentations and answer questions relative to their budget requests. OMB finalizes recommendations based on the Executive Review Committee results and a balanced budget is recommended by the County Manager to the Board of Supervisors as the Proposed Budget in early March.

The Legislative Budget Review Committee is comprised of the County’s Board of Supervisors, who represent each of the County’s five magisterial districts. The purpose of the proposed budget is to present to the legislative body and the public a comprehensive picture of proposed operations for the budget year, expressed in both verbal and statistical terms. During the hearings, the Board of Supervisors examines all line items in each of the department’s budgets and all associated operational premises.  This gives departments the opportunity to be face to face with the Board of Supervisors, letting them know their accomplishments in support of County operations and services.

Once the Board of Supervisors has received the County Manager’s proposed budget, a date is set for the public hearing on the Budget (held in April).  The Code of Virginia requires that the County advertise a synopsis of the budget in the newspaper and that one or more public hearings be held before the Board adopts the budget. The Board of Supervisors adopts the Annual Fiscal Plan during April and sets tax levies for the Calendar Year. 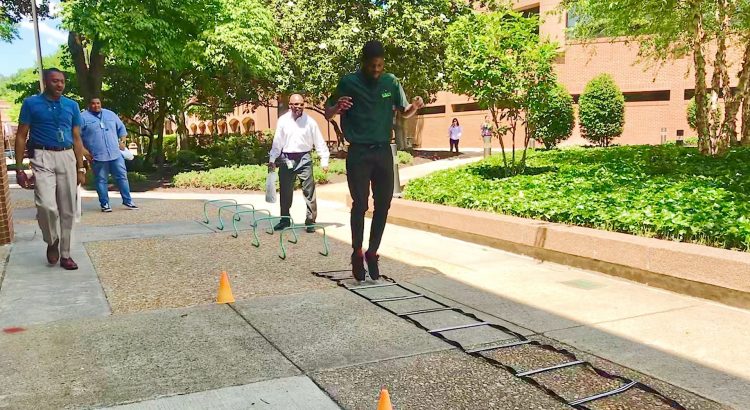 Each year, the Fitness and Wellness Division of Human Resources plans an exciting program to celebrate National Employee Health and Fitness Day (NEHFD). This year we presented the Powering Your Wellness Through Health Health and Fitness Fair on May 15 at the Western Government Center.  The objective of the fair was to continue to educate employees on the best ways to be the healthiest version of themselves as possible.  There was an awesome turnout with 200+ employees attending the event and engaging with vendors. The POWER Henrico partners in attendance included: Empower Retirement, Employee Health Services, Fitness and Wellness, and Optima (Employee Assistance Program), EngAGE, Recreation and Parks, and the Office of Risk Management. Community Partners who supported the event included Anthem, HCA, American Cancer Society, American Family Fitness, ACAC, and YMCA. In case you missed the event please head over to power.henrico.us to find information about POWER Henrico and make sure you are on the lookout for the next NEHFD event!