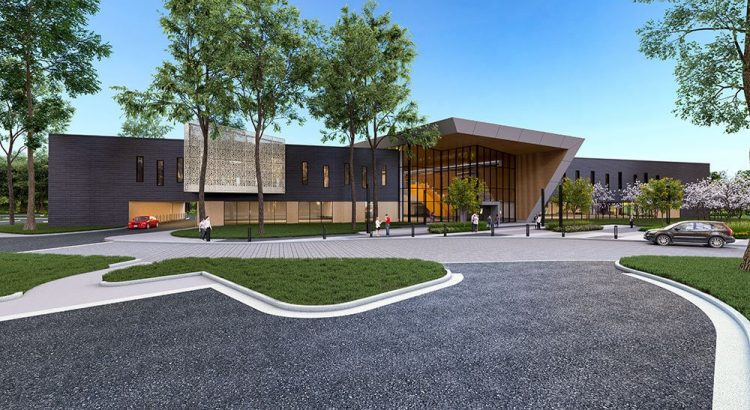 “It’s just so beautiful.” Those were the words shared by numerous visitors who toured Henrico’s new Fairfield Area Library when doors opened to the public for the first time on Sunday, October 6. The library welcomed 2,500 people at the Grand Opening and, by day’s end, patrons had checked out over 1000 books. Each Henrico library focuses on a specific theme, with Fairfield’s theme centering around the convergence of black political thought, dually led by Booker T. Washington and W. E. B. Du Bois. With intentionality embedded in the aesthetic and visual representation of the library, County Manager John Vithoulkas described it as a “facility that goes so far beyond a library at the minimum level.”]

For quite some time, Henrico’s community has waited in anticipation for the library’s new building to open its doors, and not just because it’s something new. As Patty Conway, Henrico Library’s Community Relations Coordinator, shared: “Before the building opened, there were years of planning, during which time the community could give input and feedback into the building’s features and design. This added to the feeling of possibility and anticipation for all of us, I think—that the building is such a reflection of the community, a monument to the community’s need and values.” However, it’s not just the citizens who have been monumentally excited for this new addition to Henrico’s East End. We asked a couple of our own Fairfield Library employees about their experience with opening the new library.

“I’m sure it’s everything you would think it could be,” said Fairfield Library Manager Mike Hatchett. “Of course, it’s very exciting for everybody involved and it’s exhausting, packing, moving, unpacking, looking for things you know you’ve packed, but can’t find.  Then you look up from all the work and find yourself in a truly fantastic space.” The new Fairfield Area Library is a noteworthy upgrade, with over double the square footage of the previous building, a modern design of rooms for study or meetings, and designated areas for children, teens, and adults. The library also has a digital media lab, a recording room, a beautiful fireplace, and even an outdoor space for activities. When asked about his favorite thing about the library so far, Hatchett explained, “My favorite thing is seeing long-time Fairfield patrons come up to the staff and just hug them with joy.  ‘We did it,’ they say, ‘we finally did it.’”

Conway says the Trailblazer’s Wall—a monument to significant people who influenced the culture of the county, state and nation—is her favorite thing about the library so far. “The stories it shares are inspiring… At the library’s grand opening, many Trailblazers and descendants of Trailblazers attended the opening ceremony, which was incredibly special. I hope the wall offers recognition to the local and regional heroes it depicts, and that their stories go on to inspire others to do great things.” With features such as these throughout the library, employees discover an interactive environment as they check out a book, study, use the computers, or just sit to read and enjoy the view. As this new facility caters to its patrons through these innovative mediums, Henrico employees focus on what they do best—going above and beyond to deliver the best customer experience for those that they serve.

“For most librarians, it’s a once in a lifetime experience,” said Hatchett.  Fairfield opened its previous library in 1976. Now over 40 years later, Fairfield frequenters are witnessing the start of a legacy that will reflect “the many interests and needs of the community it serves,” said Conway, “and it has the spaces to support those interests and needs as they change and evolve.… It’s a great feeling to be a part of something like that, and we are lucky as librarians in Henrico that we have these kind of facilities that support our work.” 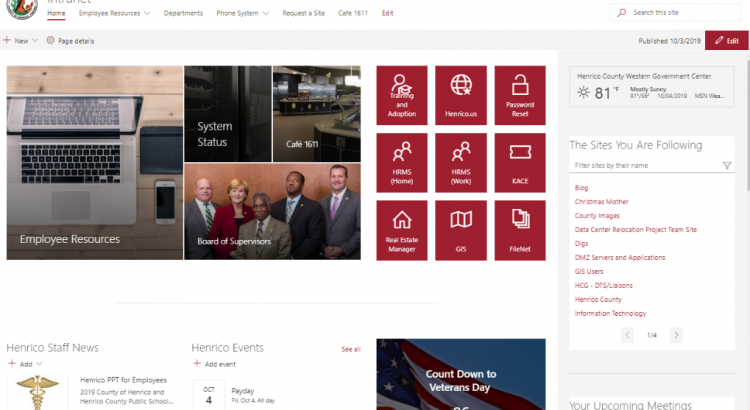 An intranet is a private website focused at an organization’s staff, versus the public. At Henrico, this has commonly been served by http://virtual.henrico.  “Virtual” has been in place for a very long time.

Based on survey results, usage analytics and research into modern Intranets, Information Technology is nearing the completion of the new intranet and is ready to have you try it out!

Note: The new intranet is still under active development – we are still adding content, features, and images. While we look forward to your feedback, please only review the site and provide feedback, and use Virtual for an actual source of information.

Some of the new features you can look forward to with the new intranet:

The new site is planned to go live in mid-November.  You can visit the new site by going to https://henricova.sharepoint.com.

Here are some Frequently Asked Questions (FAQs) we have already gotten related to the new site:

Q. The site asks me to login, why?

A. We are leveraging SharePoint as a part of Office 365 for a significantly more modern intranet. This is tied to the same login account you use for your email to log into your computer. This does mean due to Microsoft licensing, Schools and Libraries employees must request direct access.

Q. What will happen to Virtual?

A. Starting at the launch, http://virtual.henrico will link to the new site. A legacy URL will be provided. We plan on decommissioning the legacy intranet site in early 2020.

Q. Something is missing that is very important to me, what do I do?

A. You can submit all feedback using this form or by clicking ‘Feedback’ available at the top of the new site. 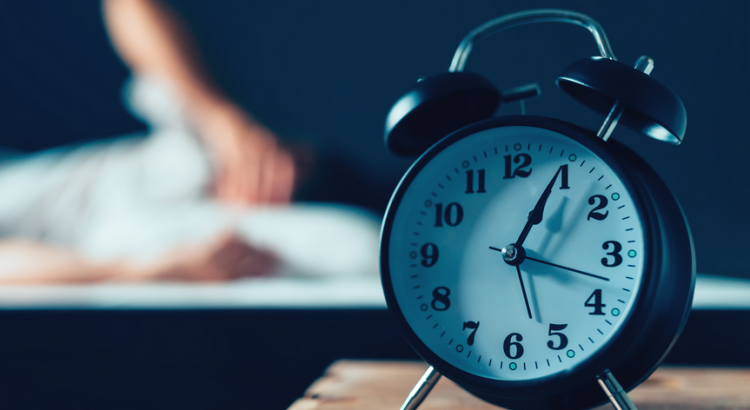 Follow these simple steps to put yourself on the path to a fully energized, fully awake YOU! Start by running a “7 for 7” sleep experiment. Seven hours of sleep for seven nights in a row. No excuses. Even if you think you can function well on five or six hours. This is non-negotiable. Which means you will also need to…

Pick a bedtime. Choosing a set time that you day will end is THE KEY to getting those seven hours. If you know when you must wake up back it up by 7 hours and viola, that is your bedtime! This becomes the hard stop for your day. To close your eyes at the time you’ve picked, you’ll need to…

Establish a wind down routine. A regular wind down routine is vital to falling asleep more easily at night and staying asleep until morning. You will want to begin this routine about an hour before bedtime, giving your body and mind time to decompress from your day.

For more information on healthy sleep, visit the National Sleep Foundation at www.sleep.org