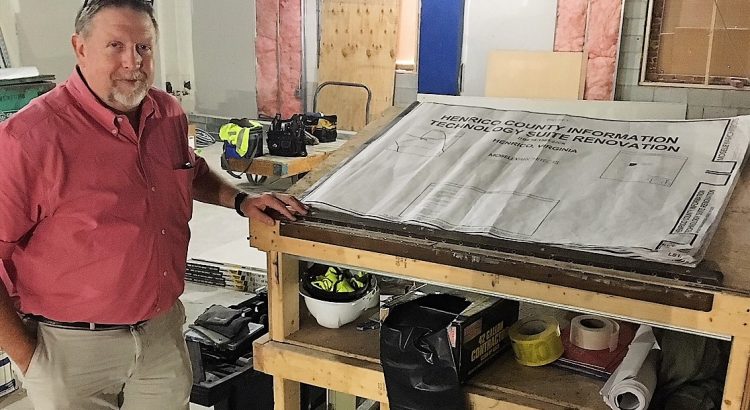 If you have walked around the second floor of the Administration Building, down the IT hallway, or even outside, you have probably heard one, if not all, of these sounds over the past few weeks. That is because the Department of Information Technology (IT) is getting a much-needed upgrade to their workspace.

Earlier this year, unveiling of the new data center on the third floor of the Administration Building happened, kicking off the entire IT remodel process. The original data center, built in 1976, had not been significantly updated since its installation. The completion of the new center shrunk the size of IT’s footprint by 3,400 square feet just moving it from the second to the third floor, allowing all the space it once occupied to be converted into offices. “We are excited,” said George Bains, Assistant Director of Information Technology, “A big part of this lets the department as a whole, look at everything new again.”

Not only was the data center moved, but the office space on the second floor is being completely renovated. IT is even getting new windows! The construction on the second floor is so big that it must be done in two phases in order to accommodate everyone’s work environment. Phase One should be completed in early October when the construction crew turns over half of the space (what was the old data center) to IT. They then have to build their new desk areas, assemble furniture and get everyone moved to the new side before demolition starts on the half they just vacated.

Along with all the new offices being built, IT will be gaining a large conference room, multiple collaboration rooms, open meeting areas, standing white board walls and did we mention new windows? “It has been exciting to see we were able to include this as a capital project. It allows us to access creativity we have not been able to before,” said Bains. Not only is collaboration happening between the construction crew and IT but General Services and Schools all have a hand in this renovation project too. When it is all said and done, 16 school employees will now be located in the Administration building, along with the majority of the IT staff.

Completion of all construction, painting and moving should be done by March 2019, and Henrico County will see the benefits of this project for years to come. Through creativity, collaboration and seeing beyond the walls of IT, this renovation project is bringing our information technology office space into the 21st century.